Oliver says he believes in Jesus Christ, yet he isn’t a Christian. How can this be? The problem is that our friend Oliver has a different Jesus. He’s not talking about the Jesus of the Bible.

It’s kind of like this: if a stranger approaches you and says they know your buddy “John,” but all their facts are wrong concerning him, you could safely conclude they are referring to a different John. With that in mind, there are many religions that claim they know and believe in Jesus, but that doesn’t mean they are referring to the same Jesus of the Bible.

The real Jesus sparked more controversy than any other religious leader in history. He made radical claims, He spoke, not from, but with, authority, and forgave people of their sins, which was a hook that God alone could hang His hat.

He healed without medicine, fed thousands from a boy’s lunch, and calmed the raging sea. His claims: He claimed to be the way, the truth, and the life, and said that no man would come to the Father but through Him.

He claimed to be the bread of life, the light of the world, the good shepherd, the true vine, and the resurrection and the life, and He was ultimately crucified because He claimed to be God. He was able to conquer death by rising from the grave as He said He would. How is that? Because, He is the Christ, the Savior of the world.

So, if someone comes to you talking about Jesus, but he doesn’t sound like the Jesus of the Bible…that’s probably because he isn’t. 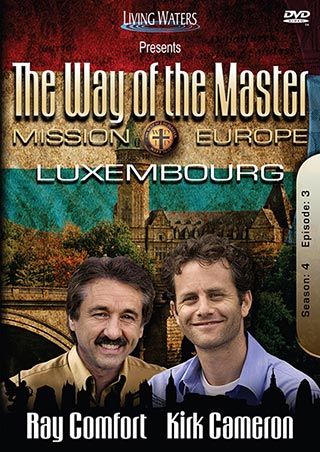 This segment is taken from the “Way of the Master” TV show, Episode: Luxembourg.

I’ll be in Heaven Next to Hitler

Christian evangelist Ray Comfort shares the gospel with two young men, one who says he thinks he’ll be in Heaven next to Hitler when he dies.

Is God a Cruel Tyrant?

Is God a “a vindictive, bloodthirsty ethnic cleanser” as Richard Dawkins claims? Is the God of Scripture a cruel dictator or is there a fuller picture that’s being ignored?

Evidences Bibles Are Back in Stock!

This apologetics Bible will enrich your trust in God and give you powerful and compelling evidence, not only for the existence of God, but for the inspiration of Holy Scripture.
© 2021 Living Waters Publications. | Permissions | Privacy | Terms of Use
Back To Top
×Close search
Search