Miguel was raised in Tijuana, Mexico, a border town on the California coast. If you were looking for a place to settle a city you might pick somewhere like Tijuana. Its sandy beaches and rolling hills have a beautiful slate mountain backdrop, yet it’s well-known to Southern California residents for its drugs, gangs, underaged drinking, and legalized prostitution.

Miguel grew up in a traditional Mexican home where his parents practiced a mixture of Catholic tradition and Mexican superstition. He always considered himself a good person; maybe that is what led him to become a police officer. “Every year we used to have an annual soccer game with the guys I grew up with. We would play cops vs. bad guys, literally! But being a cop wasn’t my dream. I wanted to live the American dream and move to California, get a corporate job, and own a home that I could raise a family in,” Miguel said.

Miguel did just that. He moved to the US, landed a management job at one of the largest corporations in America, married, and had three beautiful children. Despite living the American dream, he was dead in sin. His wife, Erica, was saved and would diligently pray for Miguel. “He would go to church if I asked, but I could tell he wasn’t saved,” Erica said. “He didn’t lead the family and wasn’t very interested in the Bible.”

One night they were watching Way of the Master, our television show that airs in over 190 countries around the world. “I was watching him more than the TV. I wanted to know what he was thinking,” Erica said of her husband.

Today Miguel explains, “As Ray started going through the Good Person Test, I first thought, Oh, I’m a good guy. I have a job and take care of my family. But then Ray asked, ‘Have you ever looked with lust?’ And at first, I thought, Well, sure, who hasn’t? But the Spirit started to convict me. I realized that I wasn’t a good person. Though I wasn’t like the drug dealers, I still sinned against God and my wife.”

God was using the Holy Spirit to reveal Miguel’s sins to himself.

With tears in her eyes, Erica told us, “All of a sudden he turned to me and I could tell he was crying. He got on one knee and said, ‘Erica, I’ve sinned against you. I’ve looked with lust. Can you forgive me?’” She did, and that night Miguel repented and put his trust in Jesus as His Lord and Savior. 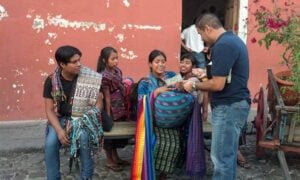 Miguel and his father-in-law later attended a one-day Living Waters evangelism training seminar and his life was never the same. “It completely changed my life.” Miguel soon left his corporate job to work full-time with Living Waters as our Spanish Outreach Director. The Lord has blessed the Living Waters Español outreach since Miguel joined the team. It has expanded to having representatives and resources in fourteen countries and trained over 15,000 people through in-person events to proclaim the gospel biblically. He has worked diligently to translate material into Spanish, and Way of the Master now airs in fifteen Spanish-speaking countries!

Will you prayerfully consider partnering with us today? Your help will continue to change lives like Miguel’s. Our hope and prayer are that many more like him would come to a saving faith in 2021.

What Mike Tyson Did Was Wrong! …Or Was It?
Mike Tyson was recently in the news for beating up an annoying drunk. The Bible is right: drunkenness will only get you in trouble.
I Want to Go Back to the World
Born-again believers often struggle with sin, but is it normal for a Christian to fall away completely, or is there more going on than we like to think?
When a Christian Should Marry a Mormon
Is there ever a time when a Christian should marry a Mormon? Listen to Ray Comfort as he shares his perspective on this question by recalling a past conversation he had on a Christian radio show.
© 2022 Living Waters Publications. | Permissions | Privacy | Terms of Use
Back To Top
Search