“What is Truth?” It’s difficult to think of a more important topic than the nature of truth. Truth is that which agrees with reality.

Society no longer cares about truth. It doesn’t matter what one regards as “truth” just as long as they are sincere. Truth is subjective, society says, and it’s up to each individual to decide for themselves what is right and wrong. On the contrary: we need to remember that anything other than the truth needs to be rejected. When an individual “suppresses the truth in unrighteousness” and comes to the false conclusion that “there is no truth” or that “there are many truths,” they will inevitably reject the concept of absolute morality. What “seems” right to one individual may “seem” wrong to the next.

According to this logic, to one person child pornography is acceptable, but to another it’s a serious offense. So who’s right?

This is why Jesus said, “Sanctify them by the truth. Your Word is truth.” The Bible alone is the standard for “absolute” or “objective” truth. The main reason why people reject God’s Word as truth is because they don’t want anyone telling them how to live their lives. Our culture shuns authority and looks down upon biblical values.

Many think that if you reject the Bible, you can live however you want. They say, “You can follow the Bible if you think it’s right for you, but since I don’t think it’s right for me, I won’t.” That view is held by many, but when taken to its logical conclusion, it proves disastrous. For example, what if I feel that it’s “right” for me to ignore traffic lights? Can it really be right in any sense of the word? Of course not. If something is true because someone thinks it’s true, then all sincere statements ever uttered would be true—even those that weren’t correct!

If morals are decided by the individual, why not live that way? Why not rob a bank to feed your family or steal a car to get to work on time? Why not base all your decisions on whether or not YOU think something is right or wrong? That would be ridiculous. Jesus said He came into the world to testify to the truth.

Don’t be wrong when it comes to the truth that Jesus is the only way to the Father. “For there is no other name under Heaven given among men by which we must be saved” (Acts 4:12). And that’s the truth. 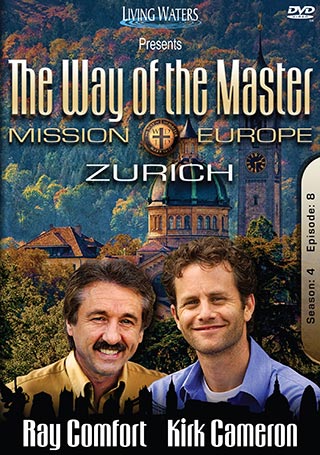 This segment is taken from the “Way of the Master” TV show, Episode: Zurich.

How to Witness to a Muslim

In this video I show you how you can share the gospel with a Muslim. Watch how Sammy responds to the message of the Bible.

Looking for a good, free Bible reading plan? You might appreciate this new one for YouVersion to go along with Ray’s new book “Faith Is For Weak People.”

Be Trained by Ray Comfort & Team & Evangelize with Living Waters!

At the Ambassadors’ Academy, you will get equipped to serve as a bold ambassador of Christ and gain a new passion for the lost. Hosted by seasoned evangelist Ray Comfort and the Living Waters team.
© 2021 Living Waters Publications. | Permissions | Privacy | Terms of Use
Back To Top
×Close search
Search