“Since God made me as I am, and I sin, isn’t sin God’s fault?” Some people claim that their desire to sin is just part of who they are, so it must be natural. They say, “God made me this way,” or, “I was born this way.” Well, that’s partially correct: they were born that way. As a result of the fall of mankind, each of us were born with a sin nature and sinful desires. Because of this, it’s natural for us to be drawn into temptation and sin. In the same way, pedophiles, adulterers, alcoholics, and drug addicts usually don’t make a conscious decision to choose a self-destructive lifestyle; they simply give in to their sinful desires. But that doesn’t make sin ok.

Although a desire for sin is natural for unbelievers, God can change that. Jesus came to save His people from their sin. God gives His children new desires and helps them withstand temptation. God’s desire is to restore fallen humanity.

Skeptics will often say that if a toy manufacturer creates a faulty product, he is the one who is at fault. They then go on to say that it’s God, not the sinner, that is responsible for sin. However, there’s a very big difference between sinful man and a faulty toy. Man is not a manufactured inanimate object; he is a moral being, created with the ability to make decisions between right and wrong. Unlike a toy, man is morally responsible for his own actions. The good news, however, is that his Creator can forgive his sin. But if he stubbornly or skeptically continues to violate the Law of God, he will eventually be punished for every sinful thought, word, and deed.

Just like you, I was born with a tendency to lie, steal, and live my life by my own selfish desires. It’s called “sin,” and it’s in every one of us. Our sin has corrupted us and made us enemies of God. That’s why we need to be born again.

When a person finds a place of true repentance and faith in Jesus, God will take away their unclean spirit and give them a new heart with new desires. The Bible says, “Therefore, if anyone is in Christ, he is a new creation; old things have passed away; behold, all things have become new” (2 Corinthians 5:17).

Remember, just because your car turns left, it doesn’t mean it only turns left. If you find yourself going the wrong direction, God allows U-turns. As it says in Acts 17, God “commands all men everywhere to repent, because He has appointed a day on which He will judge the world in righteousness by the Man whom He has ordained. He has given assurance of this to all by raising Him from the dead.”

The pathetic attempt to blame God for making someone the way they are is like excusing someone for raping and killing just because they have the XYY genetic disorder, which makes them predisposed to violence.

Don’t blame God for your sin. Repent today while you still have time. 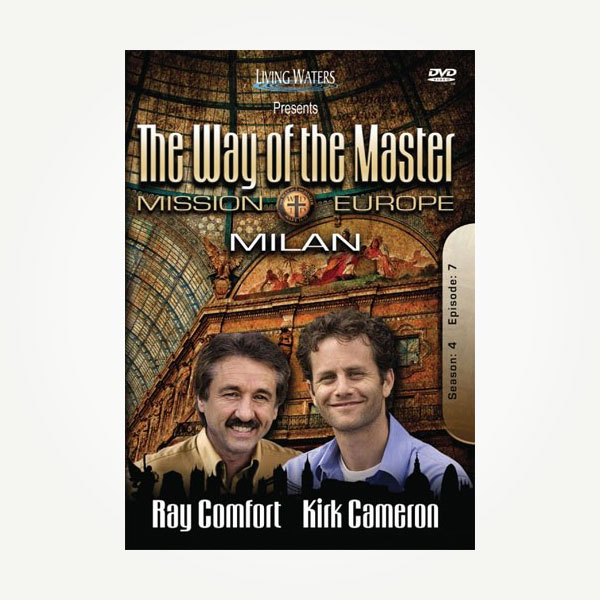 This segment is taken from the “Way of the Master” TV show, Episode: Milan.

He Was Raised by Jehovah’s Witnesses

You will love this conversation between Ray Comfort, a Christian, and a young man who was raised with Jehovah’s Witness theology.

Ray Comfort wasn't able to share the gospel with this man...because he wouldn't let Ray talk about God at all.