Don’t Blow It at the Finish Line

You did it! You just shared the Law and the gospel with an unbeliever. Well done! But, your evangelistic task is not complete. Now that you have given the cure to their disease, you must rightly tell them how to appropriate the cure. Failing to give the right salvation instructions is worse than a doctor who diagnoses an illness but writes a prescription with the wrong directions. The results are deadly.

“Failing to give the right salvation instructions is worse than a doctor who diagnoses an illness but writes a prescription with the wrong directions. The results are deadly.”
Share on twitter Share on facebook

What should we tell people they must do to be saved? The same thing the Bible tells them: repent and believe the gospel. Over thirty times the New Testament commands repentance and faith.

Jesus came into Galilee, preaching the gospel of God, and saying, “The time is fulfilled, and the kingdom of God is at hand; repent and believe in the gospel.” (Mark 1:15)

Therefore leaving the elementary teaching about the Christ, let us press on to maturity, not laying again a foundation of repentance from dead works and of faith toward God. (Hebrews 6:1)

[Paul was] solemnly testifying to both Jews and Greeks of repentance toward God and faith in our Lord Jesus Christ. (Acts 20:21)

Repentance is essential to salvation. As Charles Spurgeon said, “Sin and hell are married unless repentance proclaims the divorce.” God commands all men everywhere to repent (Acts 17:30), and is “not willing that any should perish but that all should come to repentance” (2 Peter 3:9).

Some modern-day theologians claim that repentance does not mean “turn from sin.” They claim the Greek word for “repent” literally means “to change one’s mind.” Therefore, all a sinner needs to do is change his thinking about Jesus, but he does not have to change his ways.

These theologians are correct about one thing: the literal translation of “repent” is indeed to “change one’s mind.” But like so many words, a literal definition does not capture a word’s entire meaning.

Imagine a sports commentator who claimed a pigskin orb is not a “football” because the word literally means a “foot” and a “ball.” Imagine if he said a running back couldn’t block because his title permits only running back. Al Michaels would never say a quarterback didn’t score a “touchdown” because he didn’t “touch” anything or fall “down.”

Here are the words of two distinguished Greek scholars regarding the meaning of “repentance”:

The predominantly intellectual understanding of metanoeo as a change of mind plays very little part in the New Testament. Rather the decision by the whole man to turn around is stressed. It is clear that we are concerned neither with a purely outward turning, nor with a merely intellectual change of ideas. (Colin Brown)

The term demands radical conversion, demands a transformation of nature, a definitive turning from evil, a resolute turning to God in total obedience. This conversion is once for all. There can be no going back, only advance and responsible movement along the way now taken. It affects the whole man; first and basically, the center of personal life, then logically his conduct at all times and in all situations, his thoughts, words and acts. The whole proclamation of Jesus is a proclamation of unconditional turning to God, of unconditional turning from all that is against God, not merely that which is downright evil, but that which in a given case makes total turning to God impossible. (Gerhard Kittel)

Repentance means that you realize that you are a guilty, vile sinner in the presence of God, that you deserve the wrath and punishment of God, that you are hell-bound. It means that you begin to realize that this thing called sin is in you, that you long to get rid of it, and that you turn your back on it in every shape and form. You renounce the world whatever the cost, the world in its mind and outlook as well as its practice, and you deny yourself, and take up the cross and go after Christ. Your nearest and dearest, and the whole world, may call you a fool or say you have religious mania. You may have to suffer financially, but it makes no difference. That is repentance.

To insist that repentance simply means a change of mind is illogical. If your son hit your daughter in the nose, would you want him to change his mind about his sister and keep hitting her? No, you would expect him to stop sinning against your daughter. That is precisely what God expects.

Some people say that repenting is a work and therefore cannot be required. While that may appear to be true, it is not.

Some evangelicals claim that repentance is not necessary because the Gospel of John never uses the word “repent.”

Not only does the Bible command repentance thirty times in the New Testament alone, there are dozens of additional descriptions of repentance:

And Jesus was saying to them all, “If anyone wishes to come after Me, he must deny himself, and take up his cross daily and follow Me” (Luke 9:23). Jesus said, “Anyone who loves their life will lose it, while anyone who hates their life in this world will keep it for eternal life” (John 12:25). “And he who does not take his cross and follow after Me is not worthy of Me” (Matthew 10:38).

He died for all, so that they who live might no longer live for themselves, but for Him who died and rose again on their behalf. (2 Corinthians 5:15)

Some people claim that it is impossible to turn from your sins. But if you love chocolate and your doctor took some blood tests and discovered that you will die if you continue eating chocolate, I’ll bet you could give it up.

Make no mistake, God does not expect perfection before you get saved. No Christian will ever be perfect until God glorifies him, but God expects a change of heart, mind, emotion, and will. Repentance is not perfection, but it is thinking and moving in a new direction.

Imagine you and I are in Nebraska and I invite you to join me on a road trip to Florida. After twenty hours of driving, you notice some troubling signs: lots of pine trees but no palm trees, thermometers in the single digits, a large sign that reads: Canada 89 miles.

“Some people claim that it is impossible to turn from your sins. But if you love chocolate and your doctor took some blood tests and discovered that you will die if you continue eating chocolate, I’ll bet you could give it up.”
Share on twitter Share on facebook

What would you like me to do? Ask you into my heart? No, you would want me to:

That is biblical repentance. We expect it when someone sins against us; why would we think God’s standards are lower than ours?

There once was a great king who loved the people in his kingdom. Despite his lavish benevolence, there were rebels who hated the king.

“As crucial as it is to use the Law in evangelism, it is equally critical to give correct salvation directions. We must plead with rebels to turn from their wicked ways and place their entire hope in the King.”
Share on twitter Share on facebook

These ingrates spent their nights plotting and planning a coup to overthrow the king and usurp his throne. They failed. The king effortlessly defended his throne and the surviving rebels fled to the forest fearing for their lives.

To demonstrate his benevolence, the king sent messengers into the woods to announce that the rebels could be forgiven and restored to the kingdom. Can you imagine the messengers proclaiming, “The king loves you and has a wonderful plan for your life. Please change your mind about the king. Just bow your heads and repeat after me, ‘King, I believe in you and I receive you.’”

As crucial as it is to use the Law in evangelism, it is equally critical to give correct salvation directions. We must plead with rebels to turn from their wicked ways and place their entire hope in the King. 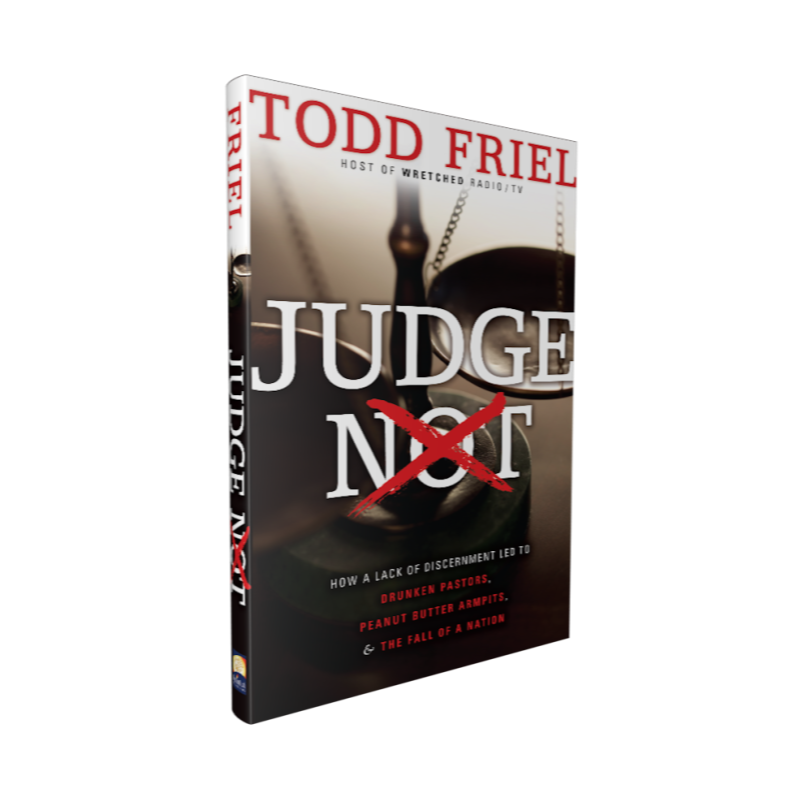 This is used with permission from Todd’s book, “Judge Not.”

Todd Friel is the host of Wretched TV and Radio. He is the author of Jesus Unmasked, Stressed Out, Judge Not, and Slaying the Lust Dragon. He is also the author and producer of over two dozen Bible study courses. Todd has one wife, three adult children, and a dog.

Watch as Ray witnesses to an atheist and quickly shows her the mindless reasoning that atheists have for their worldview—all while lovingly sharing the gospel.

America’s Race Riots: The Cause and the Cure

Don’t get caught up in the fight against racism, instead go for its cause. Racism is the web, the spider is the sinful nature of man that conceals itself, and the stick is…

Reincarnation is the teaching that after death, the soul goes to a holding place and then enters a new human body. Some believe we are incarnated into animals, plants, and even inanimate objects. This cycle continues over and over again for thousands of years until the person supposedly learns what he or she needs to learn, and then the reincarnation process ceases.
© 2021 Living Waters Publications. | Permissions | Privacy | Terms of Use
Back To Top
×Close search
Search