The Pomp of Royalty

While some in America mock the thought of a king or queen, there are many who see something wonderful about royal celebrities. The pomp and stuffiness of the British aristocracy has changed in recent years. They have come down from the balcony to give us more than a wave. Today’s royalty have become like one of the common people, and that’s endeared a new generation of fans.

I have one royal memory that still gives me goosebumps. For many years, I preached daily in the heart of the city of Christchurch, back in my homeland of New Zealand. While the Queen of England was visiting her protectorate, she stopped in the area where I was preaching, so she could plant a tree.

I was surrounded by a crowd of thousands and couldn’t see what was happening, when I remembered that I was holding onto my preaching ladder. So I climbed to the top rung and got a head-and-shoulders view of royalty as she passed by. I felt a little bit like Zacchaeus. It was a wonderful and unique experience for a common preacher. A wall of photographers was moving backwards as the queen walked forward. And as she passed near, the crowd called out, “God save the queen!” That’s what gave me the goosebumps. It was an amazing atmosphere, and one I will never forget.

“The first time [Jesus] came, He came in peace as the Lamb of God. The second time He comes, He will come in wrath as a conquering King, in flaming fire, to judge the world in righteousness.”
Share on twitter Share on facebook

Then she “planted” the tree. All she actually did was very gently take hold of a small spade, toss in two teaspoons of soil, and walk on. A plaque was then erected in front of the fortunate tree, saying it was “Planted by Queen Elizabeth the Second.” It made me smile.

In Scripture, Jesus is called the King of kings. He once rode into Jerusalem on a lowly donkey, but He is coming back on a white stallion. The first time He came, He came in peace as the Lamb of God. The second time He comes, He will come in wrath as a conquering King, in flaming fire, to judge the world in righteousness (Revelation 19:11–16).

What a terrifying day that will be for those who are found in their sin! We should get more than goosebumps at such a frightening thought. May God help us to reach the lost with the glorious gospel while there is still time.

Living Waters exists to help you do this, and we’ve created a royal Million Dollar Bill to make the task a little easier.

Prince Harry of the British royal family and Meghan Markle, an American actress, are soon to be married. As stories about this royal couple continue flooding the news, these Million Dollar Bills are sure to grab the attention of others—an interesting and inoffensive way to get the gospel into people’s hands. 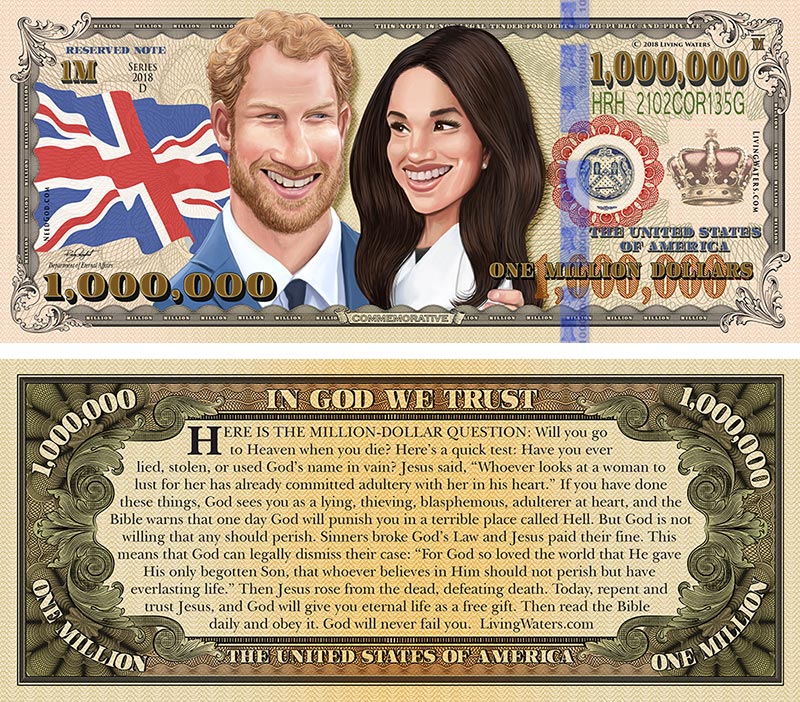 Better Than “The Avengers”!

While “Endgame”-mania is hitting the theaters this weekend, why not catch a movie about real titans clashing. Watch “The Fool”—and see why some of the world’s most famous atheists worldwide hold bananas up in mockery.

Next time you’re discussing evolution with an unsaved friend over lunch, you could ask a few questions about the evolution of the chicken (or whatever it was before it fully evolved).

How Far Is Too Far?

What does intimacy look like for singles? You deeply care for one another and want to express it, but don’t want to cross what may feel like blurry lines. God has a lot to say on the matter. In this article we’ll dig into what the Bible teaches about this extremely important subject.
© 2020 Living Waters Publications. | Permissions | Privacy | Terms of Use
Back To Top
×Close search
Search