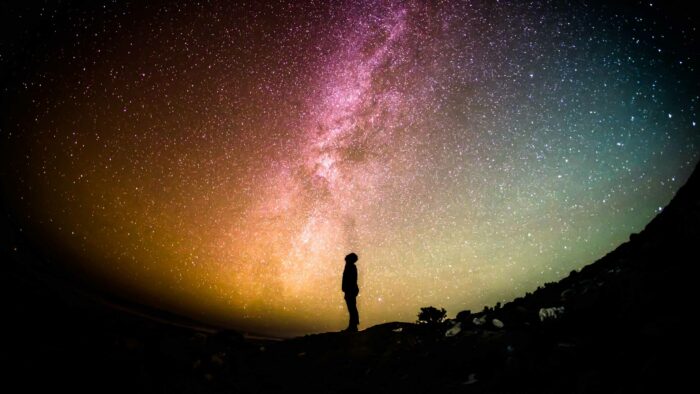 Emeal (“E.Z.”) Zwayne uses the vastness of our universe to explain the limitlessness of our Creator and how the sinner’s mouth will be stopped when he faces God on Judgment Day.

This is a transcript of an open-air outreach.

I know that some of you listening to us this morning have several things going through your minds. Some of you are a bit angry at God—you’ve got a bone to pick. And you’ve said in your mind, “You know what? When I stand in front of God on that day, I’ve got a few words for Him.” And that attitude is quite prevalent today. A number of people are beginning to feel that way. They’re going to have a few words for God when they stand in front of Him. I think the reason for that attitude is because many of us have really forgotten who God really is, and in the light of that, we’ve forgotten who we are. I’d like to put that in perspective for you this morning.

You know if a beam of light came shooting through this place right now at the speed of light, 186,000 miles per second, and we happen to have our saddle handy, we jumped on this beam of light and started flying through space at that speed, in a second and a half we’d be at the moon. In nine minutes we would reach the sun ninety-three million miles away. In four years we would finally reach Alpha Centauri, which is the star closest to our solar system. But get this: if we started at that same speed, 186,000 miles per second and went non-stop starting at the beginning of our galaxy, the Milky Way, and keep going non-stop, it would take us 100,000 years to get from one end of our galaxy to the other. Now get this: there are over 100 billion galaxies with over 200 billion stars in each galaxy, and the Bible tells us about God that heaven and the heaven of heavens can’t contain Him. And that He spans the universe with His hand. This is the God who created us. What are we in comparison to the scope of the universe? We’re less than microscopic.

When we stand in front of God on the Day of Judgment, we will have nothing to say. It’s my hope that you and I will say something before we reach that Day, and the only thing that’s going to get us into God’s kingdom is an admission of our guilt, a confession of our sin, and a faith in the death and resurrection of His Son whom God sent because of His love for us. So, folks, I urge you to turn from your sin, place your faith in Christ, and be safe from the wrath to come.

Thank you again so much for your attention. If you’d like one of these CDs, please take one. It’s called “What Hollywood Believes” and it will tell you about the intimate beliefs of Hollywood celebrities, and it’s free. God bless you.

Painting with Light
This innovative and interactive street painting was done near the Mission Inn in Riverside, CA. As you’ll see, it was a wonderful and captivating way to share the gospel.
Christianity is for Losers
Being a modern-day open-air preacher in the United States carries a lot of unwanted baggage.
The Gospel Didn’t Make Sense Until He Heard THIS
A masked man at Huntington Beach suddenly understands the gospel when Ray presents it biblically.
© 2022 Living Waters Publications. | Permissions | Privacy | Terms of Use
Back To Top
Search