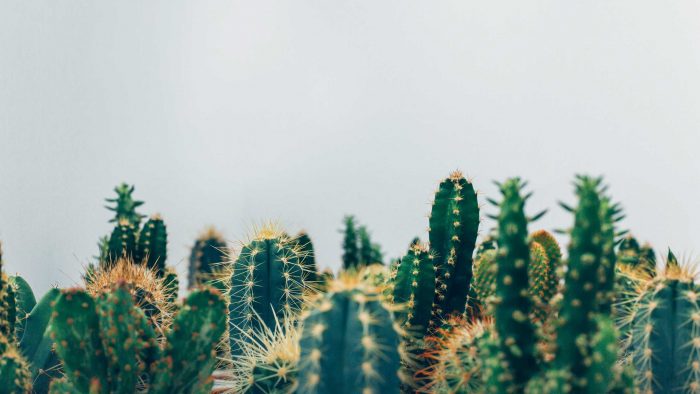 Ray springboards to the gospel using the illustration of the movie Evil Roy Slade. The movie begins with a baby in a diaper holding a teddy bear and kicking cactus, to show how tough the title character was. Sinners likewise try to kick against God.

A number of years ago I saw a movie called Evil Roy Slade. You may have seen it yourself. The opening scene is a wagon train being attacked by vicious Indians. Almost everybody is slaughtered by the Indians (it’s a comedy). Then there’s a cry from a crib and an Indian goes up to the crib. He’s dressed in horrific war paint. He pulls back his tomahawk to kill the little baby. As he looks in, he takes a look at the face of this baby—it’s Evil Roy Slade. He looks horrified and runs off in terror. The Indian had gazed on the face of Evil Roy Slade as a baby.

The scene changes and you see the baby walking through the desert. He’s about two years old. He’s wearing diapers; he’s carrying his teddy bear and he’s kicking cactuses. Evil Roy Slade is a two-year-old.

Next scene, twenty years later, you see a six-foot bronze figure, hairy chest…a man fully grown, walking through the desert, still wearing diapers, still holding a teddy bear and still kicking cactuses. Because this is Evil Roy Slade, and what the producers wanted to tell us is that, if you kicked cactuses with bare feet…you’re tough, because you’re the one that gets hurt. Think of it. Kicking cactuses with bare feet, you’re going to get hurt. But not Evil Roy Slade.

Jesus said the same thing to Saul of Tarsus on the Road to Damascus. Saul was a man who was anti-Christian. He was running around “killing Christians for God.” If you read in the Bible, he thought he was doing God a favor by torturing and killing Christians.

The Bible tells us Saul was on the Road to Damascus to kill some more Christians for God, when suddenly a light shone from Heaven, above the brightness of the sun. And a voice came from Heaven, “Saul, Saul, why are you persecuting Me?”1

And Saul said, “Who is it, Lord?” which is a good response—when a voice comes to you from the heavens you’ve got to know it’s the Lord. It’s got to be God.

He said, “Who is it, Lord?” What is Your name? And the voice came back, “I am Jesus, whom you are persecuting. It is hard for you to kick against the pricks.”2 That’s the Old English version. In other words, “Saul, by doing what you’re doing, you’re kicking cactuses with bare feet.” And the same applies for you and me. If we fight against God’s perfect will for our lives, we’re not going to win. We’re kicking cactuses with bare feet. We might as well try to fight a hurricane with our fists, or a tornado by blowing at it, or try to hold back forked lightening. You cannot fight against God.

You say, “What do you mean, ‘Fight against God’? I believe in God; I love God. He’s my friend. I talk to Him regularly.” You know, when I became a Christian thirty something years ago, I got the shock of my life because I saw the Bible tells us that God is not our friend. In fact the Scriptures say God is our enemy. You say, “Ah, man, I don’t believe that.” Well, it’s what the Bible says, and the Bible is God’s Word.

Writing to Christians, Paul said, “You who were once enemies in your mind by wicked works.”3 The Scriptures say that whoever’s a friend of the world is an enemy of God.4 If you think God is your friend it’s probably because you don’t understand your relationship between you and your Creator. You see, we’re not ordinary people standing before God. The Bible tells us we’re criminals standing before a very good and righteous Judge. You say, “I’m not a criminal; I’m a good person.” Well, let’s see. Let me read the Law to you. Let me go through what’s called the Moral Law—the Ten Commandments—and it will help you see your state before your Creator.

Let me ask you a question. Have you kept the First of the Ten Commandments? Is God first in your life? Do you love Him with heart, mind, soul, and strength? God lavished His goodness upon you. He gave you life. You were not an accident. You didn’t crawl out of some slime and evolve. God gave you a brain to think with, eyes to see with, and taste buds to enjoy good food. He gave you ears to enjoy good music. He’s lavished His goodness upon you. You’re not on some famined land, lying in the dirt with flies crawling across your face, as we often see in Africa—countries like that. God has blessed this land, and it’s only right that you and I love the God who gave us life. You say, “Oh, yeah, I love God. I believe in God.”

Well, listen as we cross to the Third of the Ten Commandments: “You shall not take the name of the Lord your God in vain.”5 Ever taken the name of God in vain? You say, “Ah, yeah. I do it all the time. It’s just a bit of a habit.” What you’re doing is taking the name of God—the name that godly Jews won’t even speak, it is so holy—and bringing it down to the level of a four-letter filth word to express disgust. Adolf Hitler’s name wasn’t despised enough to use as a cussword, and yet you’ve done that. And the Bible says that the Lord will not hold him guiltless who takes His name in vain.6 Jesus warned, “Every idle word that a man speaks, he’ll give an account thereof on the Day of Judgment.”7 So you haven’t loved God. The Bible says we hate God without cause.8 What you’ve done is violated the Second of the Ten Commandments, which says, “You shall not make yourself a graven image.”9 That is, you should not make a god, an idol, something you bow down to. And you can do it with your mind, when you create your own concept of what you believe God is like.

I did that before I was a Christian. I had this image of what God was like. He was loving and kind and a benevolent figure, and you went to Him when you had a problem. But the Bible says that God is not like that. He is perfect. He is holy. He is righteous, and the Scriptures say He’ll “by no means clear the guilty,”10 because He is just. That means He will punish injustice.

Look across to the Seventh Commandment: “You shall not commit adultery.”11 Jesus said, if you look upon a woman to lust after her, you commit adultery already with her in your heart.12 The Sixth Commandment says, “You shall not kill,”13 but the Bible says, “If you hate your brother you are a murderer.”14 Jesus warned if you get “angry without cause you are in danger of judgment.”15 Have you ever lied, or ever stolen? If you say, “Yeah, I have.” Then you’re a lying thief, and the Bible says, “All liars will have their part in the lake of fire.”16 No thief, no adulterer, no fornicator, no blasphemer will enter heaven.17 The Bible makes that clear. Can you see how that Law shows us our state before a holy God? We are criminals. We’ve a multitude of sins, and the Scriptures say because God is good and just, “His wrath abides upon us.”18

We’re like a very heinous criminal standing before a good judge, and the judge is angry that this man has raped a young woman and slit her throat. The judge is fuming, ready to bring down that gavel. That’s what God is like. His wrath abides upon us.19 But in the Bible, it tells us that this same judge is rich in mercy. The same righteous, holy God is love and mercy, and He provided a way for your case to be dismissed. He paid your fine in the life’s blood of His Son. Jesus Christ was God in human form, giving His perfect life as a sacrifice for the sin of the world. The Bible says, “For God so loved the world that He gave His only begotten Son, that whoever believes in Him should not perish but have everlasting life.”20 “God commended His love toward us in that while we were yet sinners Christ died for us.”21 Can you understand that? What a wonderful thing God has done for you. He took the punishment for your sins, so God could forgive you completely.

The Bible says, “It’s impossible for God to lie.”22 You can trust every word that God has said in the Bible. So, please, come to your senses today. Realize that if you die today and God gave you justice, you’d end up in Hell, and that’s not God’s will. He’s “not willing that any should perish, but that all should come to repentance.”23 God sets before you a way of life and a way of death. Choose life and live.24 Cry out, “God, forgive me. I’m a sinner.” Confess your sins to God. Forsake your sins. Put your trust in Jesus and you will pass from death to life. You’ll pass from darkness into light. Every day, 150,000 people die.25 So get right with God today. The Bible says, “Today is the day of salvation.”26