Be Brave Enough to Fail

Thomas Edison has been famously quoted as saying,

“I have not failed 10,000 times…I have succeeded in proving that those 10,000 ways will not work. When I have eliminated the ways that will not work, I will find the way that will work.”

The man who invented the lightbulb knew what he was talking about. Often innovation comes about through sweat and trying new things. Living Waters constantly tries new things: new tracts, new movies, new approaches. Some fail. But failure is a part of the creative process. You can’t fear failure; it’s a necessary step to discover the best way.

Last December we tried several new ways to draw an open-air crowd at Huntington Beach. We thought you might appreciate an insiders-look at our debrief:

They were wonderful, but few stopped.

Conclusion: it won’t be a mainstay. We think it would have been a bigger draw in a smaller town (there is a lot competing for your attention at this tourist-attraction beach). It would have been a bigger draw if we were able to have amplification so the singing was more pronounced (it’s not allowed), or perhaps if we had a much larger group of carolers.

This was a big hit for handing out tracts; it warmed hearts and made people smile—leaving a great first impression for when the gospel is read on the back.

Conclusion: it will likely be a new annual tradition. The first week we did it, we were surprised by how many asked if they could take a photo with “Santa” (most were adults). So, the second week I took a Sharpie and wrote “NEEDGOD.COM” on the back of a “Santa Million” and held it up for all photos (so others would see the link when it was posted on social media). Because of the craziness of how things went, “Santa” never got to get on the box and do some special holiday trivia, as we had planned, but we suspect that would have gone over well. 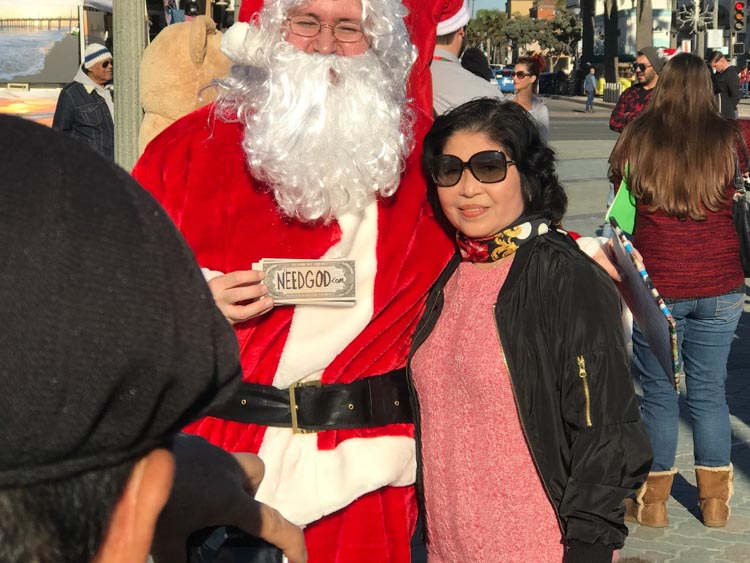 Costco sells a massive teddy bear, that Ray personally bought to bring to the beach and a local college. It was larger than life, but very cumbersome to carry and hard to transport in a car, and it wasn’t the major draw we hoped for.

Conclusion: “Zacchaeus the Bear” will be a permanent part of the LW tour, but not get much sun.

At the beach, we’ve had Christians come and break dance to help draw a crowd. Others have set up booths at flea markets using our flip chart, large groups of teens have performed street dramas set to music, our Director does street painting, we’ve done surveys, our friend Grace Mally (author of Will Our Generation Speak?) recently setup a camera and interview station to witness to people that was very well received (see picture), among many other ideas. As for open-air evangelizing, Ray has tried dozens of methods to draw a crowd, but to date trivia is still the best.

Will these things be seen by some as being gimmicky? Absolutely. Do we care? Not at all. We encourage you to find creative ways to get listener’s ears, and then once you have them, pour in the Law and gospel. Be creative like Paul—preach Jesus in a Jewish synagogue, at the local mall, quote secular poets at Mars Hill—a hotspot for ideas, in dungeons, before kings, aboard ships, wherever you can. No doubt, some of the best ideas still haven’t been thought of yet. Look for them, and consider utilizing some of the many ideas we’ve already come up. Whatever you do, do something. Be zealous for the souls of lost men and women, and make an opportunity for many to hear the gospel.

Allen Atzbi is the Vice President of Operations & Outreach at Living Waters. He is also an Executive Producer of the award-winning Way of the Master television program and the Director of the Ambassadors’ Academy. He holds a Master of Theology degree and has written four books. Allen has trained churches in evangelism and led weekly street witnessing teams for years. His parents are both Jewish: one from Israel and one from the other holy land, Brooklyn.

How to Witness to a Jehovah’s Witness

Ray asks a couple of Jehovah’s Witnesses how to obtain everlasting life. Robert ends up saying, “I don’t know.” Watch as Ray shares the gospel with this couple who are in desperate need of God’s forgiveness along with a proper understanding of the grace of God.

This Happened After I Offended a Hindu

Ray unintentionally scared an elderly neighbor recently when he brought up death, but it led to something that had them come back with sparkles in their eyes. Find out what happened.

Breaking Out of the Comfort Zone

Ray Comfort uses the story of Peter in prison being awakened by the angel (Acts 12) to show that the gospel does not awaken a sleeping sinner; the “light” comes after.
© 2020 Living Waters Publications. | Permissions | Privacy | Terms of Use
Back To Top
×Close search
Search