I was visiting my home country of New Zealand, and sitting on a plane with my daughter, Rachel, and her husband, E.Z. A rather large man was seated next to me reading a book. When I inquired if it was a good book, he said that it was interesting. I gave him a few minutes, then asked what he did for a living. Most people don’t mind being asked that question, but this man looked at me and abruptly said, “Why do you ask?” (I found out later that he had seen me giving out tracts at the airport.) I answered that I was just being friendly, and asked if he was a police officer. He said that he wasn’t. There was silence for a moment, then he said, “I am the Dean of Saint Paul’s Cathedral.”

When I asked if he had been born again, he said that he didn’t embrace that slant of “evangelical language.” When I said that it wasn’t “evangelical” language but the words of Jesus, stated in John chapter 3, he piously said, “I can accept that.” He had the warmth of dry ice.

There was a couple sitting across the aisle, so I turned toward them and asked where they were from. They didn’t speak English, so I asked, “United States? New Zealand?” and lifted my shoulders in a questioning gesture. Their eyes lit up and they said, “Barcelona!”

This was my chance to see if our Curved Illusion tracts had the ability to transcend the language barrier. I held up the two cards side by side, then reversed them. It worked! They opened their eyes wide with amazement, so I passed them the cards. I learned they were part of a 40-person tourist party, so I handed the tracts to each of them. Then I gave them our Wallet tracts. They loved them, so I gave out our Pressed Pennies with the Ten Commandments pressed into them. They didn’t know what I had given them, so I said, “The Ten Commandments!” They remained puzzled. I said “Moses!” and gestured a “beard” on my chin. I then reached into my bag, grabbed my Bible, and held it in the air. They yelled, “Biblia! Biblia!” It was then that I heard the sound of melting ice. The Very Reverend was laughing.

“That’s what we are—bullfighters. Before us stands a great beast called ‘fear.’ If we don’t overcome it, it will overcome us. We must take hold of the red cape of the blood of the Savior, and bring the beast into submission.”
Share on twitter Share on facebook

I was on a roll. I did a sleight-of-hand trick for the crowd, and they laughed with delight, calling “Bravo! Bravo!” I was now standing in the aisle of the plane and did another trick. More “Bravos!” then spontaneous applause. I bowed, and for some reason, felt like a bullfighter.

That’s what we are—bullfighters. Before us stands a great beast called “fear.” If we don’t overcome it, it will overcome us. We must take hold of the red cape of the blood of the Savior, and bring the beast into submission. The Bible says, “They overcame him by the blood of the Lamb and by the word of their testimony” (Revelation 12:11). We must kill the beast with the two-edged sword of the Word of God: “I can do all things through Christ who strengthens me” (Philippians 4:13).

If you have never given someone a tract, maybe you will say to yourself, “I could never stand in the aisle of a plane and give out tracts, but I think I could drop one in a shopping cart as I’m leaving a supermarket.” Or maybe you could ask someone, “Did you get one of these?” and pass the person a tract. Perhaps a Christian friend will see you do that, and your zeal will encourage him.

My enthusiasm even had an effect on my cool religious friend. Afterward, he smiled and became very friendly toward me. A little boldness had not only put a pile of Christian literature into the hands of a party of Barcelonian tourists, but it had warmed his heart. He even took one of my books, saying that he would read it, and he sought me out later to give me one of his business cards.

It was Charles Spurgeon who gently reminded his hearers of the importance of enthusiasm. He said, “When you speak of heaven, let your face light up, let it be irradiated with heavenly gleam, let your eyes shine with reflected glory. But when you speak of hell, well, then your ordinary face will do.”

Adapted from How to Win Souls and Influence People (Bridge-Logos Publishers). 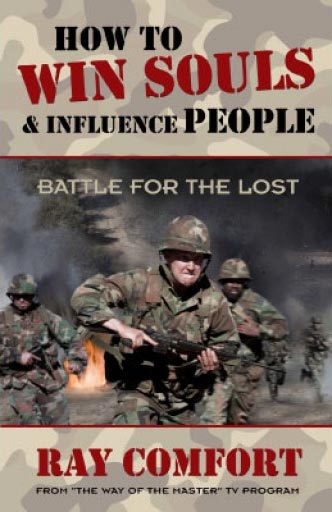 How To Win Souls & Influence People
A very comprehensive “how-to” publication on effective evangelism. Practical and easy to understand.

Tools to Save Babies!

Help save the lives of precious unborn babies in the womb through these resources.

In honor of our Mother’s—those who have grown children, and those who have a child in their womb—we are releasing our latest contribution to the cause of life: “7 Reasons,” on Mother’s Day Weekend.